Hoarfrost: How this fern-like frost forms

There is something to be said about Minnesotan grit—or at least the motivation that a good donut and a bold cup of coffee can provide. Half a foot of snow fell on Central Minnesota this past Saturday, bringing the weekend total to just under 11 inches. The roads were slick, visibility was low, and the roads were indistinguishable from the not-roads. Nevertheless, the long awaited Tim Horton’s had finally opened that day and my wife and I weren’t going to be deterred by a mere dusting. The next day, the roads were clear-ish and, while the sky was residually overcast, it was a perfect day for a family sledding trip.

It was the snow we have been waiting for all winter. After the holidays, a winter with no snow is just plain depressing, but a fluffy-fresh blanket of snow goes a long way to sugarcoat the cold and Seasonal Affective Disorder.

Monday morning, after struggling to make up my mind over the last 24 hours about whether or not physical activity and a mental break would be good for my health, I decided to finally use the snowshoes I have been waiting 3 years to break-in. So I headed down to the river for a much-needed walk in the woods.

I stepped out of my car, strapped on my snowshoes, and put my camera around my neck—and then, after angst sighing at the sky, frustratingly back in my bag.

(Side note: Always check to be sure you have A) your memory card and B) your battery. There is nothing like getting amped to take some cool pics and then realizing that you left one of the aforementioned behind.) 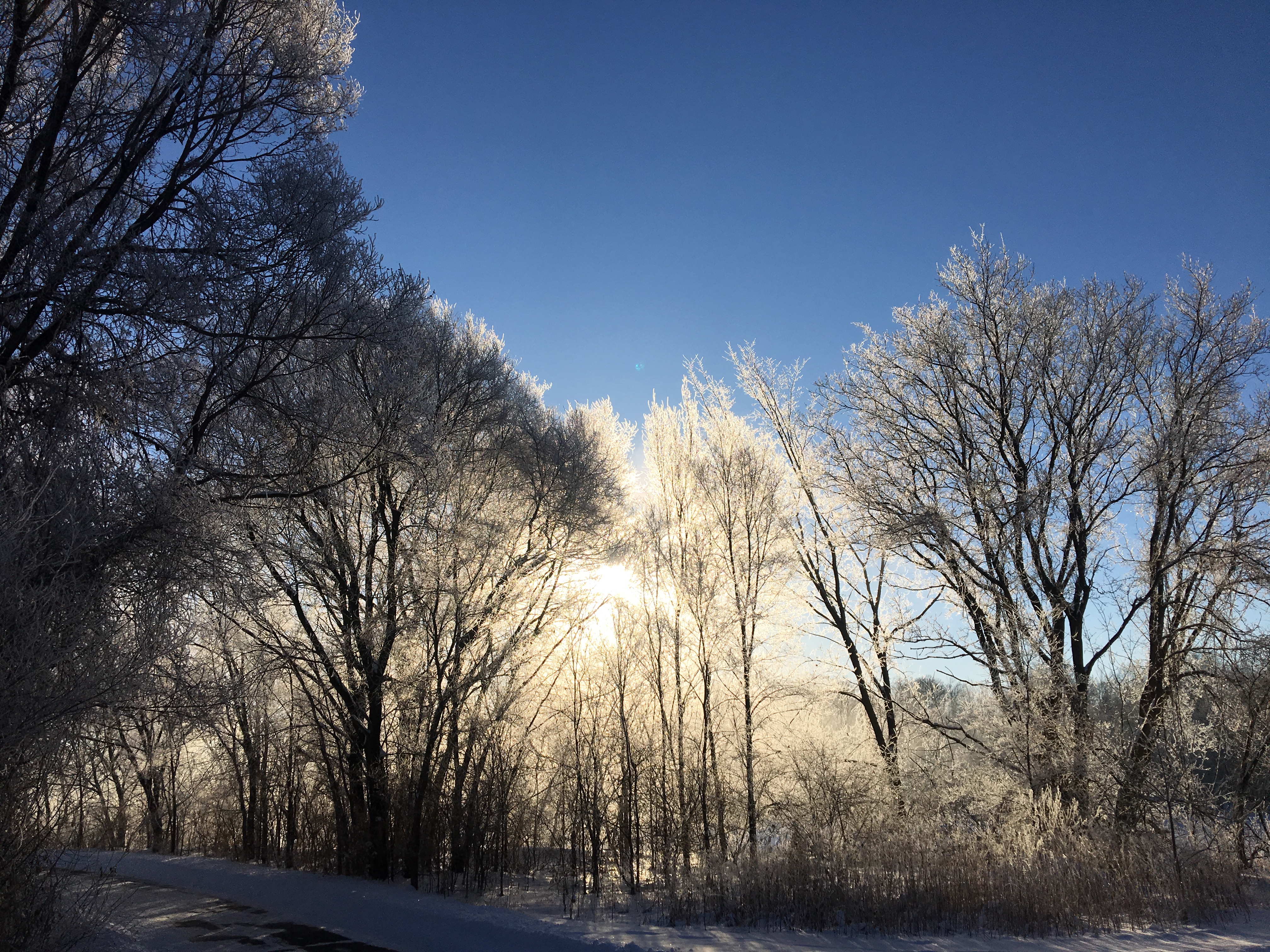 The fog was rising from the Mississippi, the air was calm, and the sun was beaming through the glistening rock candy branches. Every surface was covered in a shimmering glaze, but this was not your standard frosting—this frost was something special. Here’s a closer look. 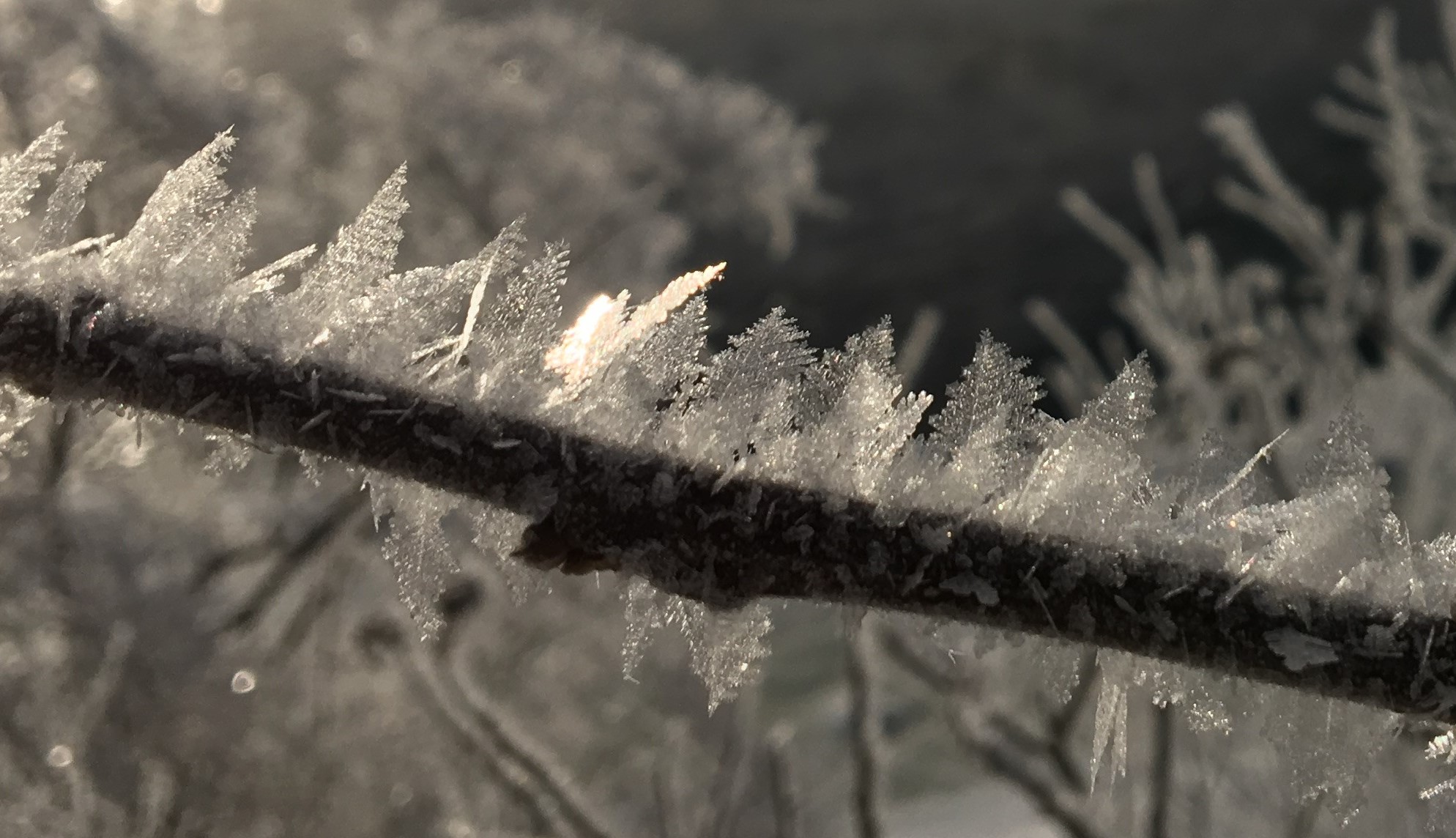 This fern-like frost adorning every branch is called hoarfrost.

For any type of frost to be made, you need two main ingredients: water vapor and a cold surface with a dewpoint (temperature at which dew forms) below freezing. When the water vapor in the air (a gas) comes in contact with that surface, it phases directly from a gas to a solid, skipping the liquid phase all together. This process is called deposition. So, rather than condensation or dew building up on the surface, it jumps over that stage directly into ice.

So, that is just frost in general, but it doesn’t explain what leads to the formation of this feathered frost. The key isn’t a new ingredient, but more of one in particular—water vapor.

The more moisture that is in the air, the more frost can form. Remember, this occurred after a few days of snow, a little melting on Sunday, and lots and lots of fog hovering over the river. Water vapor in the air was anything but lacking.

When the air is thick with moisture, more ice crystals can form through deposition, and more ice crystals means more surface area. As the available surface to form ice crystals increases, we get these mesmerizing interlocking patterns of ice, structured almost exactly like a birds feather.

By the end of the day, the frost had melted away. To think, if I had chosen to stay indoors, I would have missed out on a truly spectacular sight.

For more pictures of this frosty phenomena and other pictures from that morning, check out the slideshow below: