“It was completely exhilarating!”

In the Central American country of Panama during the fall of 2012, Dr. Jaimie Voyles, disease ecologist and general biologist at the University of Nevada-Reno, and her colleagues were on a desperate search, “bashing through the jungles, beaten up, and muddy, and wet, and bug bitten.”

They were trekking through one of their test sites “where they had always been prior to the outbreak” when they came across a golden find—with black spots.

“Just perched on a mossy boulder and looking perfectly healthy and happy. It was just a really thrilling experience”, Dr. Voyles said.

They had found their first healthy male Atelopus in years.

“It was a pretty happy moment and we took a lot of pictures and measurements and then, somewhat reluctantly, put him back on his mossy boulder and wished him well.”

This particular amphibian find was a male variable harlequin frog (also known as the clown frog or golden frog).

“They’re very striking and there’s a lot of variation, of course— hence the variable. They tend to be a very bright canary yellow color with black markings and sometimes looking a little bit like spots and stripes,” describes Dr.Jaime Voyles. “They are a very conspicuous frog out in the rainforest streams. Little bright colored jewels against a very green backdrop.”

“All estimates were that this genus, its entire genus, was in trouble so to find this frog was an indication that all was not lost and we had a bit of hope from that point on that we could move forward to understand, you know, how it could be that some species are still hanging on”, Dr. Voyles said.

“In the past, prior to the outbreak events and infectious disease spread through—that changed things dramatically—but prior to that, they were very abundant in certain sites.”

There were some places where you could be walking along the stream and see them hopping about and darting beneath your feet.

Dr. Voyles says her and her colleagues started working in Panama around 15 years ago “and at that time it was a really great place to work if you liked amphibians because there were so many species and so many frogs to work with.” However, soon after, the outbreaks began. 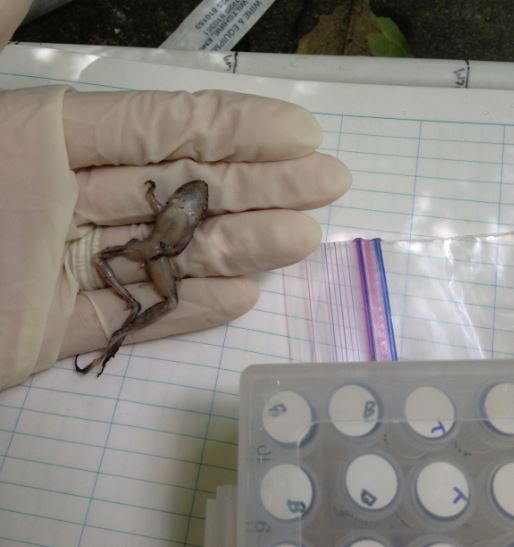 “We would find very sick and dying frogs along the side of the streams. That was really devastating and I think it really changed things for our careers and going forward and we’ve been working in that area ever since to try and understand what happens to host populations after a disease outbreak”, said Dr. Voyles 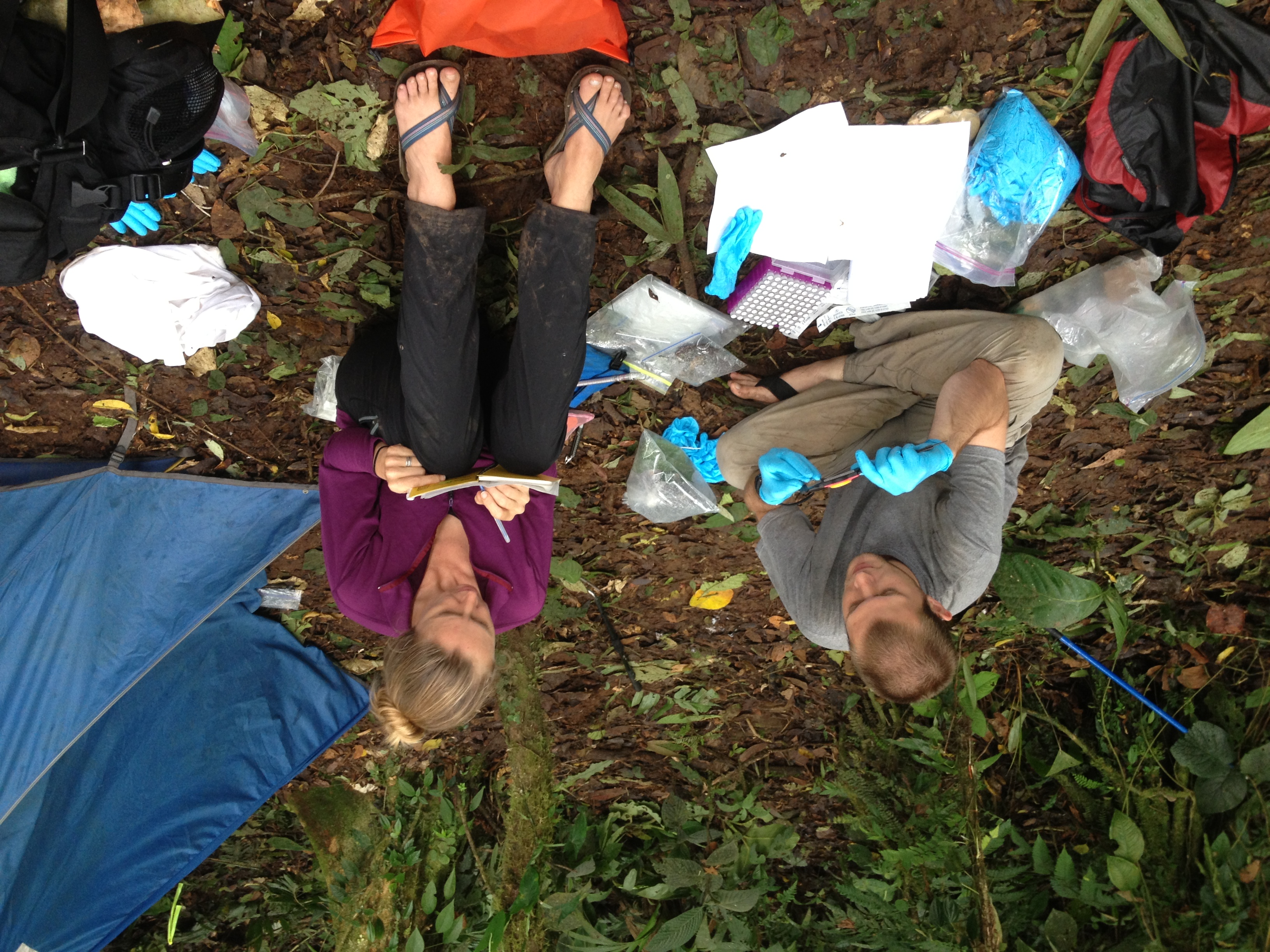 This was not, and is not, only occurring in variable harlequin frog populations.

“In some areas where we work in Panama, those areas can have, you know, as many as 70 different species within a relatively small geographic area. So, as you can imagine, there’s a lot of variation—some of them are more rare, a lot of them can be hard to find— but from our rough estimates, we think that approximately 20% didn’t really seem to be affected by the disease”, said Dr. Voyles.

The disease is an aggressive fungal infection called chytridiomycosis. It is caused by a type of chytrid fungus, colloquially known as Bd, which is shorthand for Batrachochytrium dendrobatidis.

It’s a pathogen that scientists weren’t really aware of until the late 1990’s, “about 1998-1999 was when it was first described and noticed because of the disease that it was causing in amphibians”, said Dr. Voyles.

But recent research by Dr. Voyles and her team is providing what may be the first glimmer of hope in far too long. They have evidence that a small subset of these amphibian populations may actually be on the rebound—not a substantial one, but a rebound nonetheless.

“So, there’s a handful of species that we know were thought to be gone as a result of the disease and for this handful of species, and this is only a small subset of all the species in the area, but for those species we know that they have had major shifts in their population since the outbreak and we have evidence that they are at least persisting and possibly recovering in terms of abundance”, Dr. voyles said.

In trying to figure out what is accounting for the rebounds, Dr. Voyles and her team had to approach the question from two different angles: 1) Is the pathogen changing, becoming less lethal?, or 2) Are the amphibians growing resistant?

“What we did was to basically go back to the same site after many, many years so that accounted for any differences in the environment”, said Dr. Voyles. For years, they had collected samples from frog stem cells and kept isolates of the pathogens cryogenically frozen. “So, what we did was to take the samples from the historic populations and the more contemporary populations and make a direct comparison between those pathogen and host samples to see if we could understand which traits were changing between those two time points,” said Dr. Voyles.

So their attention turned towards hypothesis two, an adpatation in the frogs.

What she found was that that when lab grown petri-dishes of Bd were inoculated with more contemporary frog skin secretions, it worked to slow the overall growth of the fungus. In theory, what has been occurring is that a small portion of the wild frog populations possess a mutation that increases the potency of their skin secretions, thereby making them more likely to survive an infection and pass along those genes to a new generation.

But this new finding does not mean that the worry is over, or that this mass extinction trend will begin to reverse in the face of a newly developing defense.

“I think what our study does hopefully it actually make a call to action. We know that disease is not the only threat to amphibians and we know that habitat destruction is a major problem for amphibian declines. We also know that amphibians are confronting multifaceted problems so while we have evidence that some species might be able to better cope with this infection, it really should underscore the importance of continuing to monitor these populations because we know that the threat of the pathogen isn’t abating, and so at a very minimum we need to protect these habitats where there are recoveries occurring. If anything I think we should really redouble our efforts in terms of working on conservation of these species. They’re still in a very precarious position and we have absolutely no room to stop worrying at this point.”, Dr. Voyles cautioned.

It is also of important note that the application of this research and these findings goes far beyond Panamanian amphibians.

Dr. Voyles remarks, “I think it is a really good message that what we are seeing and what we’re trying to understand about infectious disease isn’t just limited to the amphibians and to the frogs and the toads. I think that our study is really showing how emerging infectious diseases, they’re going to continue to be a problem in the future and so if we can understand how they work we’ll be better able to predict and respond to emerging diseases in all kinds of different animals and wildlife. The same is true for humans as well. The problem of emerging infectious disease is not going away, and we can learn a lot from the frogs that ultimately will inform important aspects for human health as well.”

Listen to more, and other frogs stories, on our latest podcast episode here: