Not a Lemur, Nor a Cat. This Raccoon-Like Critter is a “Clever Fox”.

A couple of weeks back, I received a text message containing a screenshot of a Facebook post out of Austin, Texas asking: 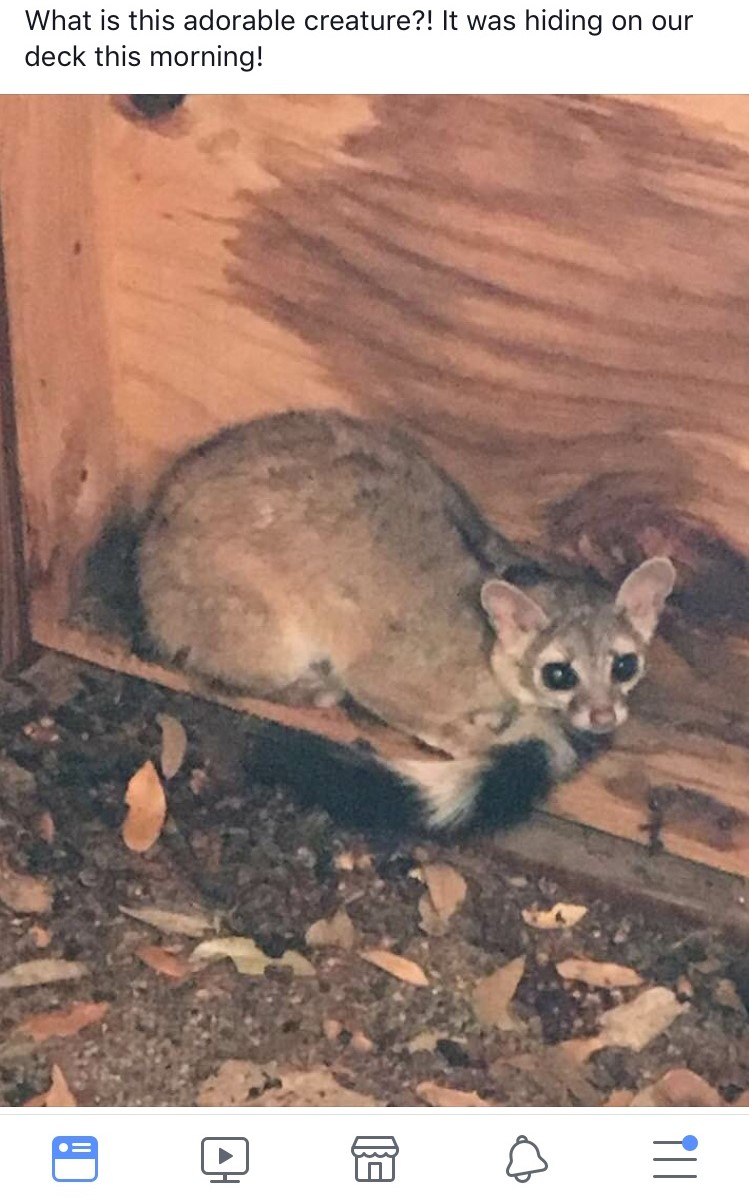 That adorable creature is none other than a Ringtail, Bassariscus astutus. No, not like a lemur—though the resemblance is uncanny.

But despite their appearance, the Ringtail is neither lemur nor cat, but in fact are members of the raccoon family.

The little critter hiding under this Austin, Texas is known by many names: Ringtail, Ring-tailed Cat, Bassarisk, Miner’s Cat, Ringtail Cat, Civet (a carnivorous, cat-like creature living nowhere near North America), and yes, adorable. Their scientific name, Bassariscus astutus, roughly translates to sly fox (Bassaris in Greek means fox [Bassariscus meaning fox-like] and astutus being Latin for sly or clever).
They are very difficult to photograph. Most pictures of them are blurry, pixelated snapshots from trail cams, and the ones people do manage to get often look like this:

Why? Because the ringtail is primarily nocturnal. This is something that you could actually tell without ever seeing it in its natural habitat, but rather by looking at its appearance. Look at its large eyes, surrounded in white which may help to reflect more light into the eyes (I’m guessing, but think about a Husky which is the opposite with black eyeliner to help absorb light and reduce glare, much in the same way football players do with black grease paint under their eyes.) They have quite the large ears, positioned upright and forward to help listen for prey and navigate the dark. They also possess long, sensitive-to-the-touch whiskers like a cat which help them sense their surroundings—much like antennae in other creatures.

Speaking of your typical house cat, ringtails are smaller in body, though their striped tail makes up for what the rest of them lacks in length by being about the same length as their body. Their tails have anywhere between 14 and 16 stripes and are a powerful accessory in balance, making them master climbers.

In addition to their nocturnal nature, they often allude sight due to their mostly solitary lifestyle. But it isn’t just humans who have a hard time in this area—their predators often luck out on catching them, either by being out-maneuvered, distracted and confused by their tail, or by being blasted by a smelly musk. After all, clever is in their name.

The ringtail lives in arid regions across Mexico and the Southwestern US, especially in the Great Bain Desert, and range from Texas, up to parts of Kansas, and across to the very southern portions of Oregon. They tend to nest up in the hollows of trees or rocky areas such as caves, or rocky indentations, (or under porches) where they will eat a highly omnivorous diet of fruits, berries, insects, birds, and other small mammals or reptiles.

If you’ve got one under your porch, consider yourself lucky, both for seeing this adorable creature and for the fact that it has probably helped eliminate some impending pest problems.

6 responses to “Not a Lemur, Nor a Cat. This Raccoon-Like Critter is a “Clever Fox”.”