In recent reflection, I came to find that hiking is not just advice. Heck, it is not even mostly advice. It is the stories we make. In an effort to keep telling these stories and further our hiking club, I would like to dedicate at least one TWL Hiking Club Tuesday a month to OUR STORIES.

If you have a story about or from hiking please do not hesitate to share. I will totally feature your story and pictures. To contact us with your story, message me on Instagram, @teaherwhohikes. You can also message The Wild Life on Facebook.

To start, I will post a narrative I wrote as a teenager about simplicity in the Boundary Waters.

The first couple of hours at summer camp always seemed to drag on. My parents would drop me off and let me know how proud they were. All of this embarrassing nonsense would lead me into one of the sultry cabins with several girls that I had never met before.  Later, we would “explore nature”. By that I mean follow a heavily used trail through the woods where you felt as though the tame squirrels were the ones that were supposed to be observing you. Sure, this ostentatious way of camping was quite the experience, when I was ten.  After four years of it, the experience had gotten old fast.

At the age of fourteen, I was once again placed into summer camp by my parents. “But Chelsea, this time you get to go rock-climbing up north,” my mother exclaimed. I didn’t want to go, but they had already paid for it. At the end of June, I packed up and headed to camp. Getting dropped off went as habitually expected. The next morning came, and I was awoken by the most obnoxious alarm clock. The girls in my cabin and I were rushed into a giant van whose destination was the Boundary Waters.

After the long van ride, we were given giant backpacks. One of the other girls gulped at the mere sight of these tacky anchors. I lifted mine onto my shoulders, and I could have collapsed into the rocky ground right then and there. It was hard to because everything I was experiencing was so new. The smells, sounds, and landscape were not anything like what my suburban mind had ever imagined. We set off into the dark green forest; of course, we were following a dirt path. I wasn’t focused on the path this time, and ignoring the squeaky girl-talk behind me was easy. I was focused on the sound the trees made as they danced in the wind. There were so many trees that I could see the spirals of tumbling wind gusts in the glimmering leaves. This place was different, and I was ready to experience it.

As we continued through the forest, the path’s width began to dwindle.  I figured the path was going to be done soon, and we would simply turn around. I was right about the path ending. The place that the chalky gravel ended was huge. A beautifully eroded hill with boulders and trees engraved in its breath taking plateau-like structure stood before us.  All I wanted to do was to climb it. The leader of our group told us that we were going to camp on top of it. I didn’t even think it would be possible to climb the hill and defy gravity while wearing bulky backpacks, but the forest’s deciduous trees towering over fresh emerald plants inspired me. I wanted to be at the same elevation as them. For the first time at summer camp, or even my life, I was actually faced with a challenge.

The climb was strenuous but quick.  When we got to the top, I had cuts and bruises all over my arms and legs, without remembering getting hurt. I must have been distracted by the scent of the clay-like dirt that we had all been digging into. It could have also been the abundance of white trees that I had never seen before, or seen enough of, for I couldn’t classify them. On the way up, we discussed the uses of these white trees.  They are called Birch trees. We were told bits and pieces of information about the biology of the tree, but we only seemed to grasp the concept about what was in the bark. The bark has pain killers in it. We all developed a fascination with it, and we ate it all the time. It smelled really good too, in my opinion.

Unfortunately, there weren’t many birch trees on the top of our hill, but there were many other plants that intrigued us. I spent much of my time picking the long grass-like plants. There was nothing more fun to me than sitting on the edge of the hill and braiding this grass. It was honestly the most peaceful experience of my life. The view from that spot had absolutely no buildings or signs of human inhabitants. I felt isolated. To my previous knowledge, isolation was a frightening concept that I never wished to experience. But, in that moment where I was overlooking miles of dark green forest dabbled with crystal blue lakes, I inhaled the isolation concept and felt it take over.

Braiding the grass became a habit; I did it all the time for meditation. A few days after I started this hobby, I was once again headed back to my delightful spot. It was the perfect time to be doing so, for the sun was just beginning to set. I took a seat, dangled my legs, and stared into the distance. Nothing could ruin a moment like this, or at least, I thought. I reached over for my grassy plants and looked down. I saw the absolute worst thing, or should I say things, ever. They were crawling up my thighs and thirsting for my blood. Nothing in this world can put me into a fright like a wood tick. The shriek that I let out was the loudest thing any of us had heard in days. I didn’t see the beautiful colors anymore, nor did I hear the sonorous birds. All I felt, saw, smelt, heard, and tasted was fear. I began to wail on my legs, until all seemed clear. I was surprised that I didn’t knock myself off of the giant plateau-like hill, and I searched for any more of those serenity ruining parasites. Luckily, I had gotten them all off, but to be safe I did have one of the other girls that were with me check me.

After four days of vigorous rock climbing, everything was coming to a close. Each of us was assigned a task for the night before we left. I was in charge of finding wood. Finding firewood in the midst of a never-ending forest sounded like an easy task. Well, it was most certainly not an easy task, for all of the wood had been drenched by the previous night’s thunderstorm. I felt every stick that I could find for the absence of moisture, but it seemed as though none of them would fit the need. The logs that looked dry made me hopeful. I would see one that didn’t reflect the sun’s rays, and reach for it. All I felt was slime. Time flew as I searched, and then it hit me. I had been peeling the white bark off of the birch trees all day, and none of them had been soaked, in fact some were dry. I went to the nearest tree and peeled the thin bark off. It was always so amusing to do so; the fresh aroma of birch trees had become my favorite. As I peeled the bark off, I got lost in my senses again. I ended up stripping the poor tree’s trunk naked. Despite that, I gathered my wood and headed back to my campsite.

I was greeted by everyone with the question, “Where were you so long, Chelsea,” and I explained the difficulty I had endured. That night, we set up our fire pit. It was constructed out of fist sized boulders that we had collected from the area, and it looked pathetic. We were actually afraid to light a fire in it because we did not wish to be the cause of a forest fire. Despite this anxiety, we started our fire at sundown. It was really relaxing to sit near it. We had decided to dedicate our conversation to our experiences and lessons that we had learned. I was not sure how to put to words what I had experienced, so I volunteered to go last. The things that I heard through the flames were surprising. I didn’t feel like I had learned the same things. A couple of girls talked about how they conquered their fears, but I had not conquered anything. I was at a loss, and I stopped paying attention to the discussion we were having. I became distracted by the warm glimmering shadows on the trees. I wondered what they would have said if they were me. It probably would have had something to do with the fact that I sat around a lot. At that moment, I came up with a summary of my experience. When it came to me, I described all of the beautiful things that I had seen. I contrasted them to the suburban life in which I had become so accustomed.

It was very easy to explain my experience at the Boundary Waters once I began. The freezing cold water that glimmered from above, the abundance rocks that never ceased to cut my feet, and the sound of the loudest silence I had ever heard were all huge parts of my explanation. The other girls agreed with me each time I mentioned something I had noticed, though the aspect of silence was one that needed explanation. I had to tell them all to sit still and listen. The sound you hear, at first glimpse, is absent. Then, once you focus more, you realize that there are so many different plants and animals near and far that you almost feel as though you are experiencing some sort of sensory overload. It was amusing to see the girls light up as I told them the things that had me in ecstasy the whole time.

The new scents, sounds, tastes, feelings, and sights had begun to trance the girls. We all went around the circle naming which of our five senses had been most affected. There were some interesting explanations to some pretty unique sights and sounds, so when the focus was on me, I almost felt embarrassed to share my answer. I looked through the fire at orange tinted girls with their blankets over their shoulders, and I said it. They looked confused. They stared. One of them even questioned what I chose. To my knowledge, the girls thought I couldn’t have come up with a more simply boring answer. Again, I smiled and said, “I just love how the dark green trees dance with the wind.” That was the end of it. We went into our tents, and we awoke with the sun. We had to pack up and leave very early, so we could return to our suburban lives. On our way back, we followed the same path that we came on. When I saw it start, I sighed and looked back up the hill. The wind blew right then and there, and for the last time, I smiled as the dark green leaves shimmered in harmony with the wind.

Chelsea is a high school English  teacher, avid hiker, mother, all around nature lover, and your #TWLHikingClub Leader. Interested in joining the TWLHikingClub? Learn more here and join our Facebook group here. You can find Chelsea on Instagram @teacherwhohikes 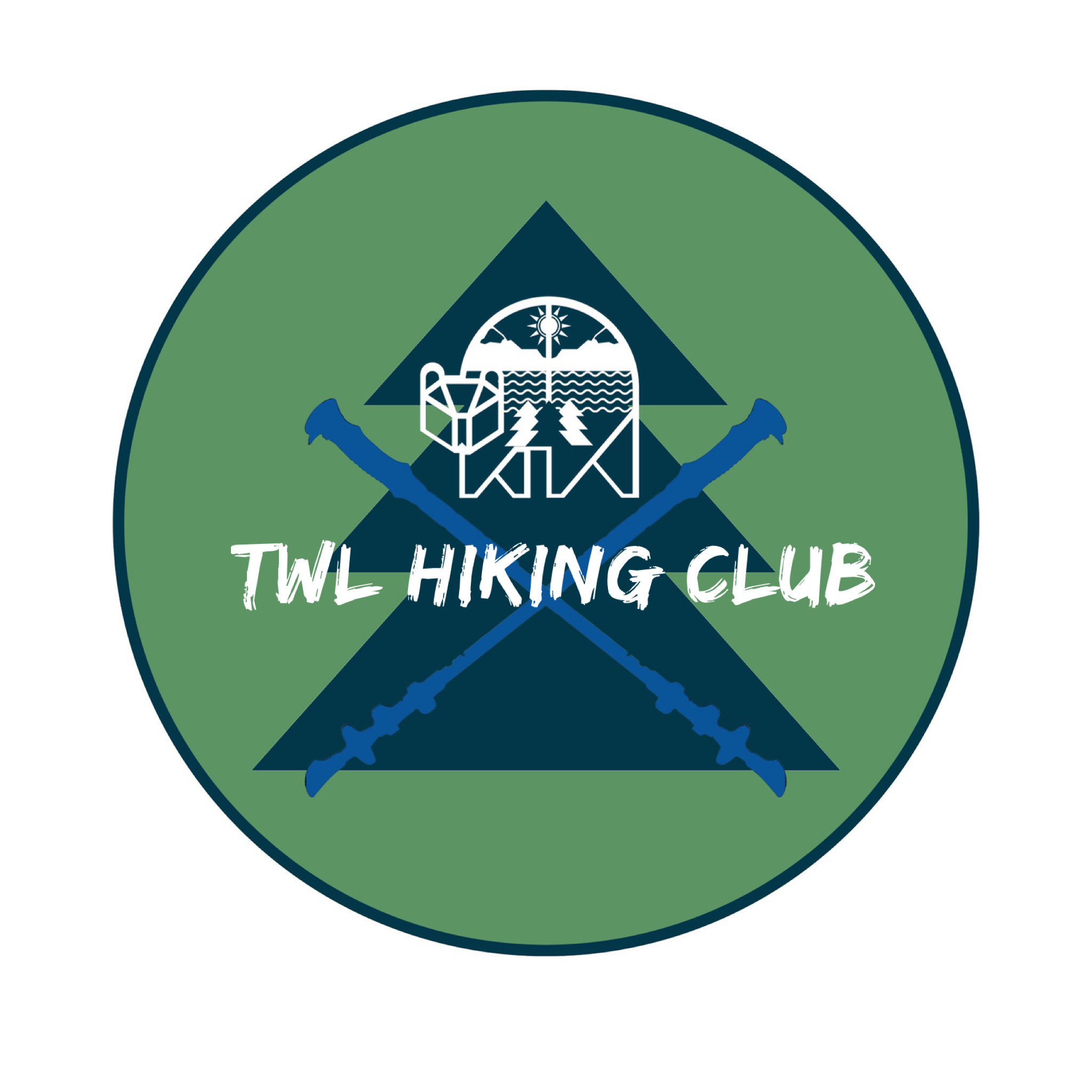 View all posts by teacherwhohikes