If there is any fish that lives up to its name it’s the Goliath Tigerfish—a truly gigantic African predator with razor sharp teeth. The largest on record weighed over 150 pounds at nearly five feet in length. For perspective, that’s two German Shepard’s stacked on top of each other, or a welterweight fighter—and a fighter they certainly are.

The Goliath Tigerfish is found in the Congo river basin region of Africa where they lie in wait in calmer portions of rapidly moving water, using their impressive sight and ability to sense micro-vibrations caused by the movements of other fish to scope out the perfect potential target and ambushing them with incredible speed and voracity. For the Goliath Tigerfish, that target can be any fish they sense they can overpower. Sometimes these ambushes can take the form of a torpedo launching from the water to capture birds in flight, as well as some well documented cases of bites on humans, crocodile kills, and the ability to split fish in half in the event they feel so bold as to take on a fish larger than themselves. Their 32, dagger-like teeth are alternating and rest in grooves in the fishes opposite jaws, much like sheathing a sword. 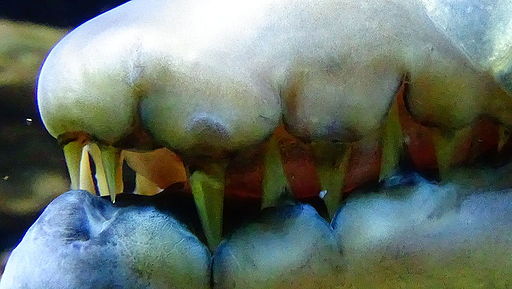 Its strength, speed, and ferocious appearance have certainly earned this fish a “goliath” reputation as one of the greatest gamefish in the world, assuming you don’t mind likely losing your gear. Sadly, its popularity as a gamefish can have negative consequences on their population health. It takes anywhere from five to 15 years for a population to double in size, so every fish removed has a lasting impact.