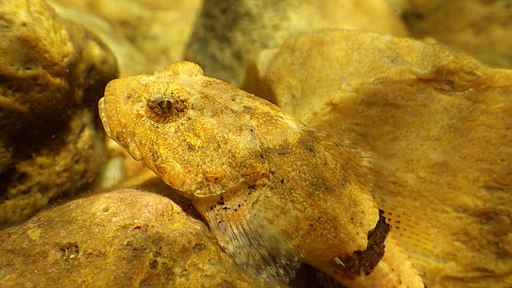 The banded sculpin (Cottus carolinae) is a mottled brown freshwater fish with dark vertical bands native to swift moving streams of the eastern United States where they dine on insects, various larvae, and occasionally, though sparingly, on other smaller fish or crustaceans. Though they sometimes eat other fish–even other sculpin–they are more commonly eaten by other fish such as trout.

As you can likely tell by the photo above, the banded sculpin has exceptional camouflage. Even more impressive, their coloration and banding pattern varies depending on their environment. They take shelter in rocks, sometimes having to compete against a surprisingly worthy foe—crayfish.

In the early spring, after the water reaches about 50 degrees triggering a biological shift in the sculpin, the spawning season begins. Sculpins beginning at 2 years of age (which is middle aged for them) find mates and breed, with the females laying eggs in clumps protected by rocks and the males standing (floating?) guard.

Unfortunately for the scuplin, their habitat is under threat. Higher concentrations of metal in streams associated with mining operations have been shown to result in lower local sculpin densities among other negative impacts. Increased stream pollution and sedimentation from agricultural sources also have immense negative impacts on the sculpin. At the moment, the sculpin isn’t under significant threat, at least not warranting listing by the IUCN, but changes in human activity and pollution prevention are going to be needed to ensure the banded sculpins long term survival.