The Xiphactinus, meaning sword ray, roamed the seas of the Late Cretaceous between 100.5 and 66 million years ago. A time when the world was a much different place, though the continents were orienting themselves in much more familiar ways, whose end was marked by one of the most violent mass extinction events of all time—the very one that wiped out the dinosaurs and the Xiphactinus alike (a topic we will be discussing in the season two finale of the podcast!). The Cretaceous is named for the white chalk cliffs of Europe like those of Dover we highlighted in season one podcast episode entitled The Air We Breathe.

The Xiphanctinus were gargantuan, at between 15 and 20 feet in length and 1,000 pounds in weight, and formidable predators with huge mouths and razor sharp teeth. In fact, many of the discovered fossils have contained secondary fossils of undigested fish within their stomachs. One such fossil is the specimen at the Sternberg Museum of Natural History in Hays, Kansas, entitled “Fish within a fish”. A photo is shown below. Many of the fossils of this genus have been discovered in places like Kansas, which may seem peculiar considering it’s landlocked, but much of what is now the midwest was entirely submerged beneath what was then the Western Interior Sea. 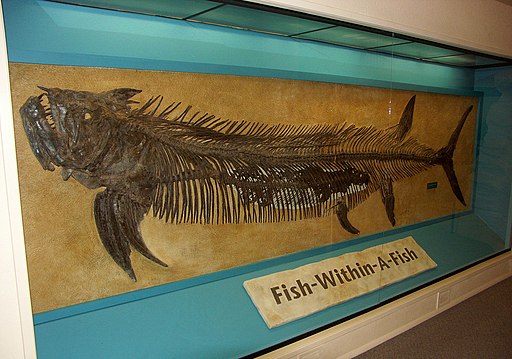