In celebration of #FossilFriday, I wanted to share an educational resource: a lesson I used during student teaching to introduce a unit on evolution.

This lesson can be modified for middle school level and was written in accordance to MN state standards which very closely mirror NGSS, however, I structured this lesson for the high school level and with a class size of 25. If you teach a larger class, your “dig site” may need to be larger, or you may need additional sites.  Here’s what I did.

Call me theatrical, but as students entered class, they entered to see me dressed as Dr Alan Grant of Jurassic Park and Jurassic Park 3 (Sam Niell’s character), satchel around my shoulder and brushes in hand next to our dig site. The dig site was an overturned beanbag toss board lined with a blue nylon tarp and filled with sawdust as a sand substitute. Buried within were fossils and skeletons–some real; some fake. Among the real specimens were a trilobite, a megaladon tooth, a fish fossil from the Green River Valley, and a few various bones. Among the artificial were a triceratops skull, a chameleon skeleton, and the centerpiece: a borrowed replica of the famous “first-wing”—the Archaeopteryx.

The task: use the tools of a paleontologist to search the site, uncover the largest fossil (unidentified at the time), and observe its traits. Once uncovered, I posed a simple question: lizard or bird? Students quickly picked sides, choosing various leads, and spending the remainder of the hour researching the characteristics traits of their pick and comparing them with the observable traits of the specimen at question.

I borrowed the Archaeopteryx fossil replica from the Bell Museum at the University of Minnesota for a very small fee. I recommend contacting local museums and universities. Some universities may even be able to 3D print such a replica for you! 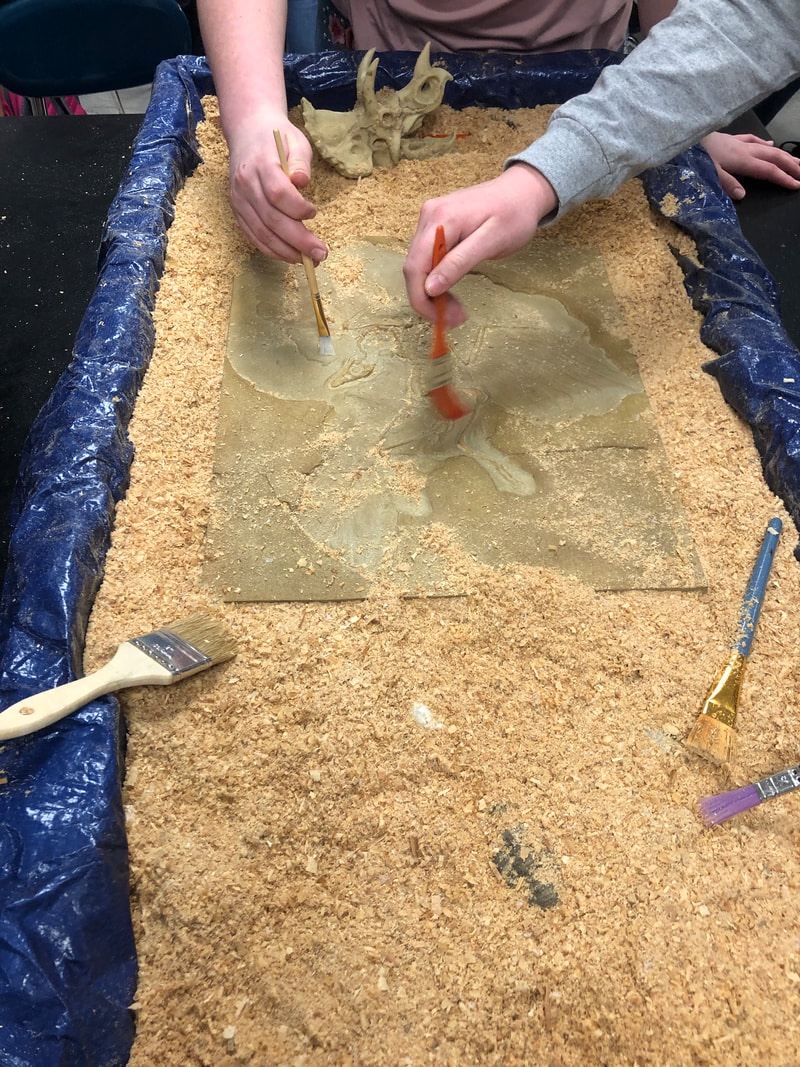 The debate concluded with a realization by the students that the specimen being observed was neither lizard nor bird, but something else. This, still without mentioning the concept of evolution, led into a discussion of transitional organisms, the context of its original discovery, and how such a creature may have existed. Ultimately, this activity made for a classroom environment much more open minded to the ideas put forth by evolutionary theory than may have otherwise been the case. There was evidence, uncovered by their own brushes, there for their interpretation.

The engagement was through the roof, too! My students left class in heated debate—far more than I had seen from them before—which lured into the next days advisory period and into the beginning of their class time. I don’t know about you, but I count that as a win!

Over the next few #FossilFriday’s, I will be sharing more resources—all of which were used following this lesson. Those will include a lesson on what we know about the “Bad Weekend” which saw the end of non-avian dinosaurs (and how we know what we know), how we date rocks and fossils, and how we know things such as what colors dinosaurs were, what they ate, how they sounded, etc. They will also include consequential fossils found by Charles Darwin and how they served as evidence for decent with modification.