When a Spider isn’t a Spider

If you’re reading this right now, you might be realizing that we’re about to be playing a game of semantics (systematics, rather). For many, if it looks like a Spider, that’s all they need to know to shiver in disgust and engage in fight, freeze, or flight. It may be pretentious to dwell on the details, much in the same way as correcting someone on snakes being venomous and not poisonous (jeez, people. Venom is injected, and poison is ingested or absorbed! It’s not that hard). I’d imagine if you’d just been bitten by a harmful snake, the distinction would hardly matter to you (…but I also can’t let it go, and it totally does matter on some level).

This is another one of those things. However, the level of which it is important to make the distinction could be argued in different ways. We could go the scientific accuracy route (but they aren’t spiders!), or we could go the each organism is important in its own right and to know the difference is to have more understanding and more, maybe, appreciation route, or the “you don’t have to kill it/be afraid of it because it isn’t a Spider” route. But let’s be honest, you don’t need to kill or be afraid of either and if that’s the route of thinking you want to take, you probably couldn’t care less if it’s technically a Spider or not, right? 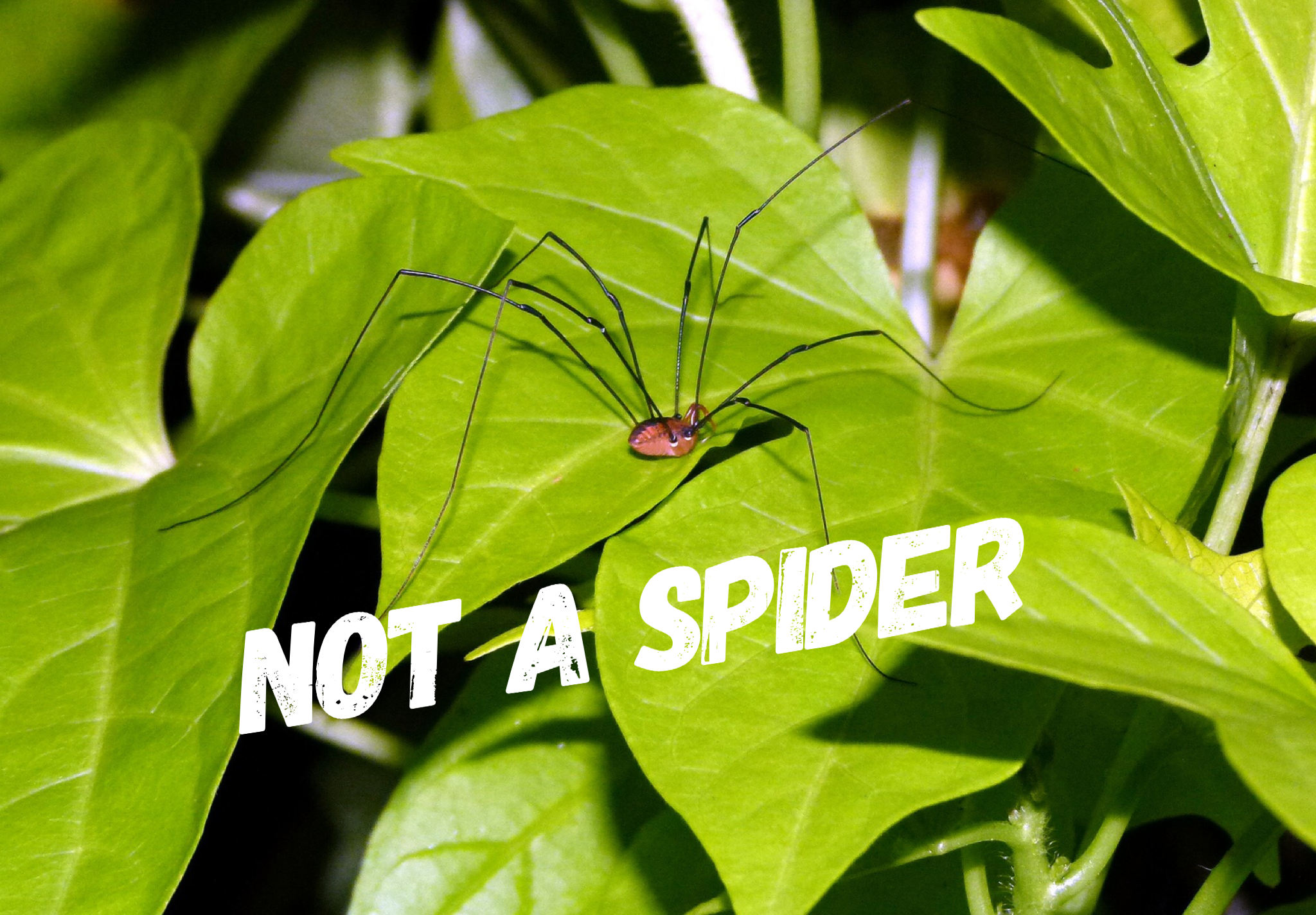 Often, somewhat disturbingly, called daddy-longlegs (even granddaddy-longlegs, which is like…what the expletive?), the critter you see above is called a Harvestmen—which is also disturbing.

First, the technicality: Harvestmen belong to the biological order Opiliones. They are arachnids, but they aren’t spiders. True spiders belong to the order Araneae. That being said, classification isn’t the only difference! Your stereotypical spider has two body segments sort of melded at the center. It looks sort of like it’s got a rubber band tightly coiled around its center, or like they’re wearing a Victorian era corset. Now you’re picturing a spider in a corset and you’ll never be afraid of them again. Thank me later. 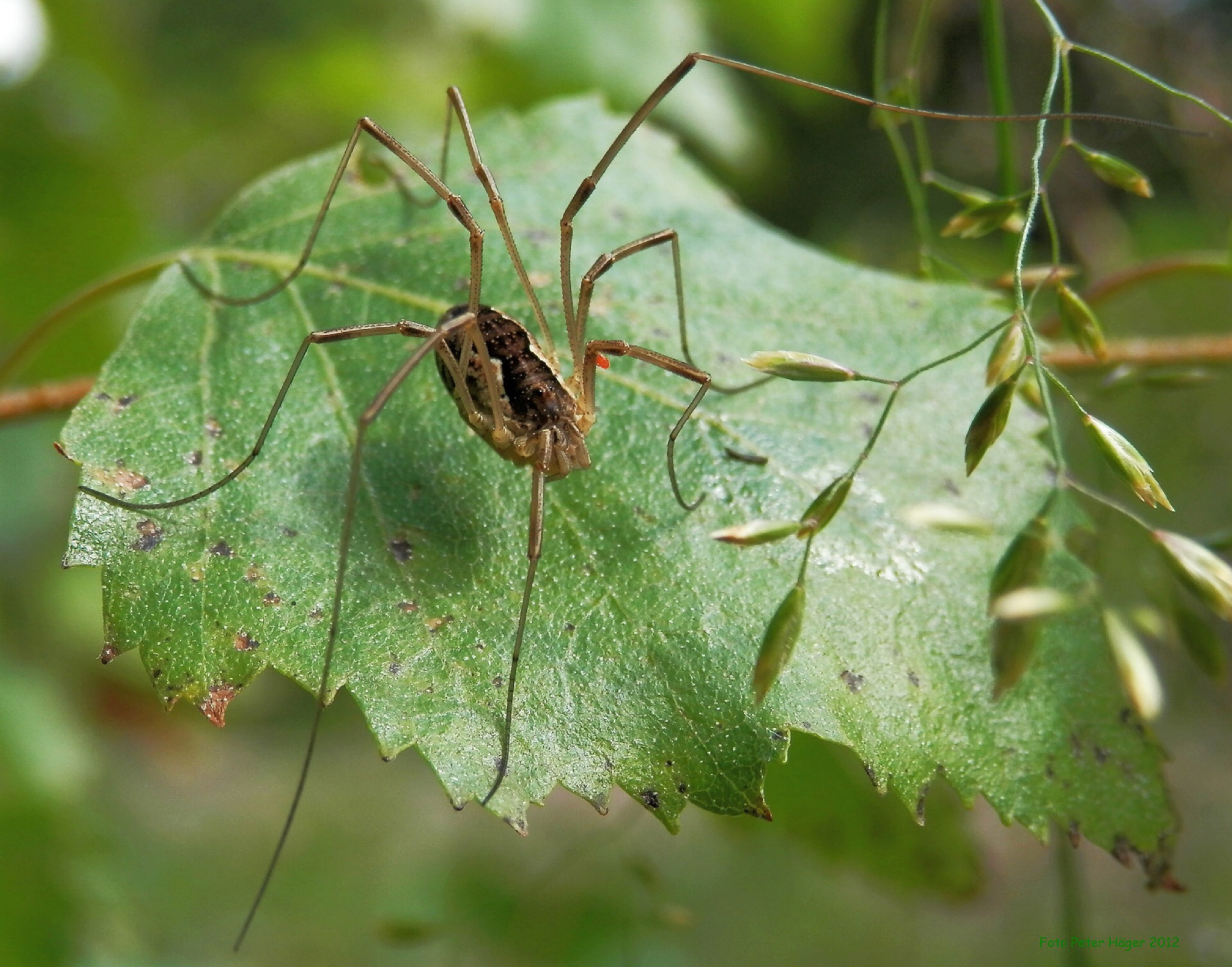 Harvestmen, however, have a body that technically also has two segments but looks like just one. That middle junction between the cephalothorax (or head-chest) and the abdomen is far less distinct.

Harvestmen, much like you and I, have just two eyes, which means they see 4 times less than their spidery counterparts. That may seem like a disadvantage, but imagine being a spider and trying to find a pair of Ray Bans with 8 lenses. That’s why you don’t see any spiders in Top Gun. All of that is mostly accurate. I mean, technically some spiders can have no eyes, or really anywhere between zero and 8. Weird, right?

Another thing, have you ever seen a Daddy-longlegs in a web? Nope. Not unless it was just visiting an Araneae pal. Harvestmen don’t have silk glands.

Oh, and another thing, and this ones a big myth-buster! Harvestmen, don’t have fangs, therefore no venom, therefore they cannot bite you and are absolutely not secretly the most venomous “spiders” on the planet like the legend would have you believe.

So, there you have it. Harvestmen are harmless, not-spiders that cannot do boo to you other than maybe scare you, which is a sort of boo…in a sense.