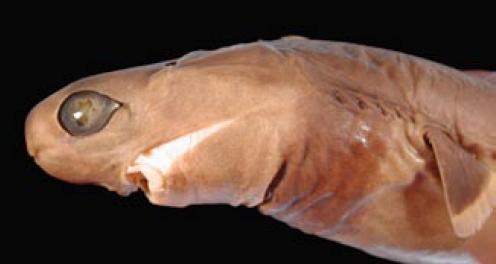 It’s #Sharkweek so this weeks #SundayFishSketch theme is, well, sharks! So, here is my favorite—the Cookiecutter Shark. Also know as the cigar shark for that one time a sailor mistook it for a cigar and only realized their mistake after trying to light it up—kidding of course— Isistius brasiliensis is  shark of the family Dalatiidae. The genus name, Isistius, is based on Isis. No, not the terrorist group, but after Isis, the Egyptian goddess of light.

They inhabit warm, deep (about 2 miles down. So, deep for us, but on an overall oceanic scale) ocean waters around the world where they spend most of their time hovering in the water column like little creeps. This shark occurs in warm, oceanic waters worldwide. At dusk, they migrate vertically to the surface. They are fairly small in comparison to what one would typically think of when imagining a shark, at less than two feet maximum.

Perhaps the coolest adaptation of the cookie cutter shark is the way that it uses bioluminescence in tandem with its dark brown color to create two different visual manipulations. Possessing light-emitting photophores on its underside, the produced glowing green light helps to give the appearance of light entering the water from above when viewed from underneath. This is part of why they move up and down the water column depending on the time of day—to match the amount of light and not risk standing out like a neon take-out sign. The dark collar, on the other hand, is believed to act as a lure which mimics the silhouette of smaller fish. When a potential predator approaches the lure, the shark seizes upon the opportunity to quickly attach itself using its Steven Tyler lips and biopsies a 2 inch wide and 3 inch deep circular chunk out of the pursuer. In the words of Michael Gary Scott, “My, how the turntables…”. The cookiecutter also is known to travel in schools which only enhances this illusionary trickery.

It uses its top teeth to grip before retracting it’s tongue in a very clever way that creates suction before using the lower teeth as a bandsaw while it violently shakes and wiggles to retrieve its fleshy dumpling.

In some parts of the world, virtually every dolphin (or other Cetacean) exhibits scars from this nightmare baker. Seals and other pinniped, large fish, and really any medium to large sized creature (including squids) are fair game—sometimes even humans (though that’s rare so don’t freak out, please.)