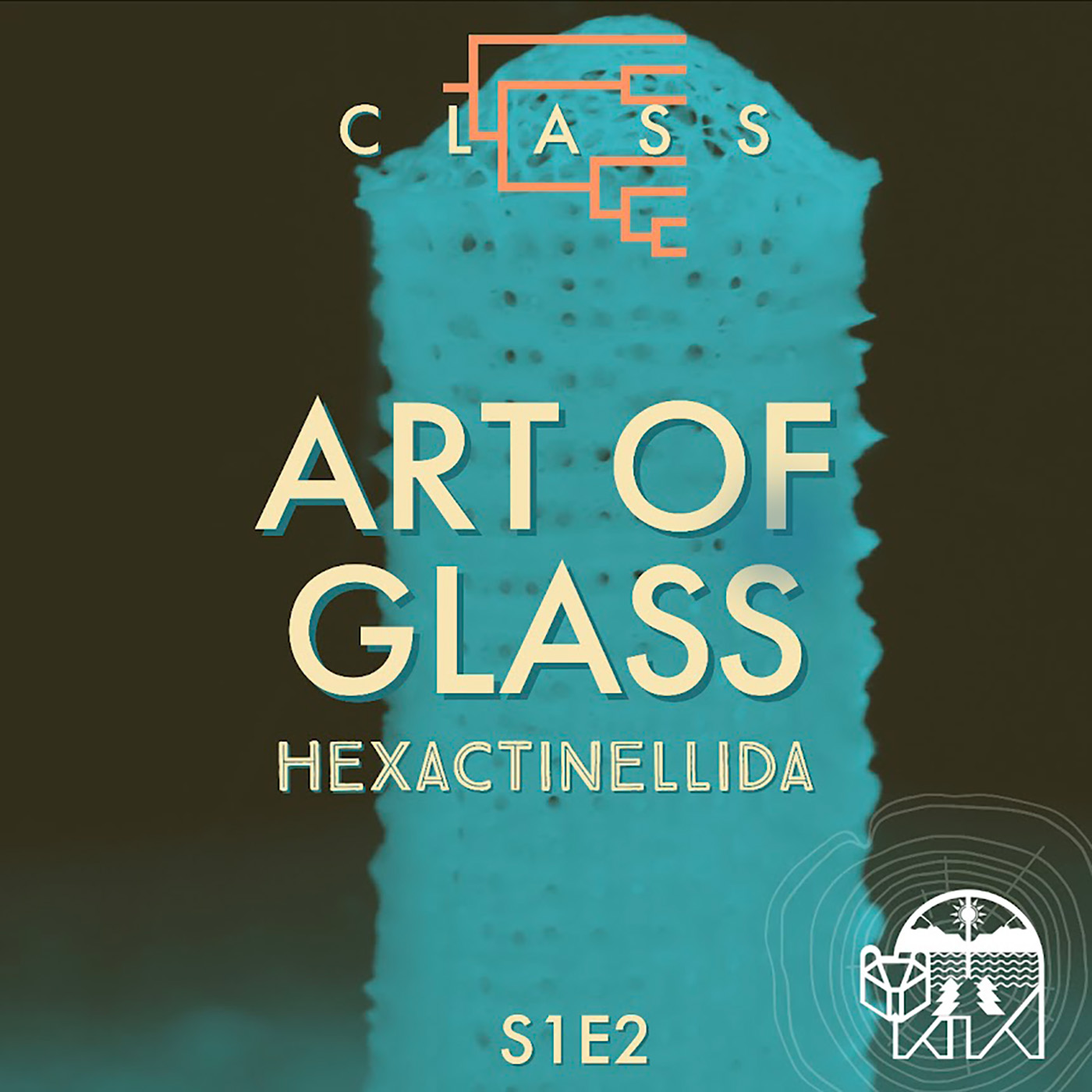 Glass sponges in general are a rare sight, but what made this discovery even more surprising is where they were found.

Beginning just 25 miles off the coast of California, The Channel Islands National Marine Sanctuary is a 1,470 square mile refuge for wildlife as well as a human heritage site.

Regions where the ocean floor can be found just 1,000 feet or so below, like Footprint Ridge and the Piggy Bank, have been pretty thoroughly explored.

But between those two sites lies a valley, plunging another thousand feet below. This time, in late 2020, the scientific team famous for their live-streaming of footage captured by ROV’s, decided to give that valley a closer look.

That’s when the NOAA experts, on Nautilus Live, stumbled upon a vast underwater field of glass.

Finds like these are becoming increasingly important as potential habitats for diverse life and as indicators of ocean health in a changing world.

But, aside from the obviously fascinating fact that these creatures have skeletons made of glass, what exactly are glass sponges?

That’s what this episode of Class is all about, the art of glass

Hexactinellid sponges have skeletons made of four- and/or six-pointed spicules, often referred to as glass sponges. Many of them look like nothing more than the ghost of a sponge made visible by a blanket of lace.

Despite their seemingly fragile existence, some experts estimate their maximum age to be 15,000 years.

Now, that number is a bit tricky. I really should emphasize that 15000 years is their potential maximum. That comes from a model-based study of an individual Scolymastra joubini which originally provided a figure of 23,000 years (with a range from 13,000 to 40,000 years), but due to changes in sea levels since the last glacial maximum, its maximum age is thought to be no more than 15,000 years.

In comparison to their phylal counterparts, glass sponges are relatively rare. As far as where they can be found, some species can be found in shallower places, for example, two species in the Antarctic that can be found just 100 feet (33 or so meters) beneath the surface and one species in the Mediterranean, Oopsacas minuta, which can be found just 60 feet down (18 meters) in an underwater cave. Some are found in the abyssal depths, but most are found between 1500 and 3000 feet below the surface in every ocean, although they seem to be particularly fond of the antarctic and northern pacific.

On episode 1, I mentioned that a general characteristic of sponges is their lack of symmetry. Glass sponges, on the other hand, tend to be relatively symmetrical.

Usually no more than a foot in height, these creatures share the same pseudo-cup-like body structure as their Porifera kin with a large central cavity but with a lattice-like internal skeleton composed of fused spicules or silica.

This fusion sometimes extends beyond just one individual. Some species are able to fuse together, creating vast reefs which provide habitat to a range of other species.

Fossil records show these reefs were especially common during the Jurassic, but their existence was thought to be lost in ancient time. Yet as technology has continued to develop, enabling more in-depth ocean exploration, we’ve discovered these undersea glass menageries continue to persist off the coasts of Washington, Alaska, British Columbia, beneath Antarctic ice, and now…California.

The ability of glass sponges to fuse as they do allows for them to create dense and complex structures that stay intact even after any one sponge dies. Even if the glass base of the reef dies, the reef can persist. Remnant skeletons trap sediments, turning brown, and provide habitat to a range of organisms, even anchoring sites for living, growing sponges. These are called bioherms, some of which have been recorded to reach heights of 60 or so feet (or 19 meters) and over four miles (or 7 kilometers) in length.

Considering the potential longevity of any one individual sponge, these reefs may be absolutely ancient.

Let’s take a peek through the looking glass to see these sponges as individuals. As alien as they seem, glass sponges hit all the markers of what makes an animal, well, an animal. One of those is growth. All of the hexactinellids have the potential to grow, of course, but the typical maximum is somewhere around a foot in height, or 32-ish centimeters. Some, however, hit that marker, and then some, reaching heights of 3 feet or 1 meter. Despite being longer in body, these larger glass sponges tend to see shorter lives.

The body of a glass sponge is made up of 3 parts: the inner and outer peripheral trabecular networks and the choanosome which is essentially the spongocoel or central chimney-like cavity I mentioned in the last episode. It’s basically the mouth whereas those canals are the pore-like passageways for food.

Of course, most all sponges filter feed by pumping water through their bodies and trapping small particles as they pass through.

Response to stimuli is another characteristic of animals and life in general. Something that sets glass sponges apart from their phylal cousins is that they have a unique ability for rapidly conduction of electrical impulses across their bodies allowing them to respond more quickly to outside stimulation.

The Venus Flower Basket is a sponge found below 500 meters in the Pacific. They possess fibers up to 7 inches long and the width of a human hair from the base of their skeleton. These are of particular interest to researchers of fiber optics, in part because of their ability to produce such fine and sturdy glass biologically through the extraction of silicic acid from the water which they convert into silica, as well as their ability to do so at such cold temperatures. Human-produced fiber optics require super high temperatures and the fibers they yield are relatively brittle.

This particular sponges’ influence on human engineering doesn’t end there. Their intricate lattice-like structure has been found to influence the hydrodynamics of the water around it in ways which may lead us to advanced designs for buildings, bridges, marine vehicles, and more.

Yet even as we study glass sponges to further develop our technologies, they may be facing the end of their existence as a result of our advancement.

How will creatures of stillness and glass hold up in a changing climate?

Creatures which outlasted the dinosaurs.

This past year, a team from the University of British Columbia (UBC) explored just what kind of impacts the one-two punch of rising ocean temperatures and acidification will have on the Cloud Sponge, (Aphrocallistes vastus), one of only 3 reef-building glass sponge species.

What they found was that all three groups saw decreased filtering ability and weakened skeletons.

Though rare, glass sponge reefs are vital ocean filters, removing 65 to 90% of the microbes out of approximately 100 billion liters (26 billion gallons) of water per day.

These reefs also provide essential habitat, serving as the bases of entire ecosystems. 106 species of fish and invertebrates have been found living within glass sponge reefs. A loss of the reef isn’t just a loss of one species, but a blitz on biodiversity.

And a loss of a lens on our planet’s history.

Monorhaphis chuni, a glass sponge of the deep nearing ten feet in height, was first discovered during the Valdivia expedition in the late 1890’s. Even then, it wasn’t the sponge as a whole, but a 9-foot-long spicule.

Aging spicules is a bit like aging a tree. These silicon spikes are made of hundreds of layers of silica around a core. The difference here is that the rings don’t correspond to a time period like a day might in some corals or a year might in many trees. What they do seem to relate to is the temperature of the surrounding water.

Beginning a decade or so ago, scientists began to consider the possibility of that the spicules of the M. chuni may serve as a type of archive of the planet’s past.

What can any one of us do to help ensure the future of the glass sponges? It’s hard to say. Sure, there are individual acts each of us can do, or even not do, to lessen their impact on a whole range of things, from the global climate to the local environment. Supporting nonprofits, supporting the work of scientists who work everyday to conserve these species, these are all a step in the right direction. But perhaps the biggest, most important thing that we as individuals can do, is to come together. Don’t act alone. Act with your local community. Vote, write to your representatives, write letters to the editor about the importance of conservation, share things like this episode on social media or with your friends and family. We can all do great things on our own, but the greatest of things are achieved when we join together with a common mission.

← Bull Kelp
Join The Wild Life. Get Exclusive Gifts for a Year! →