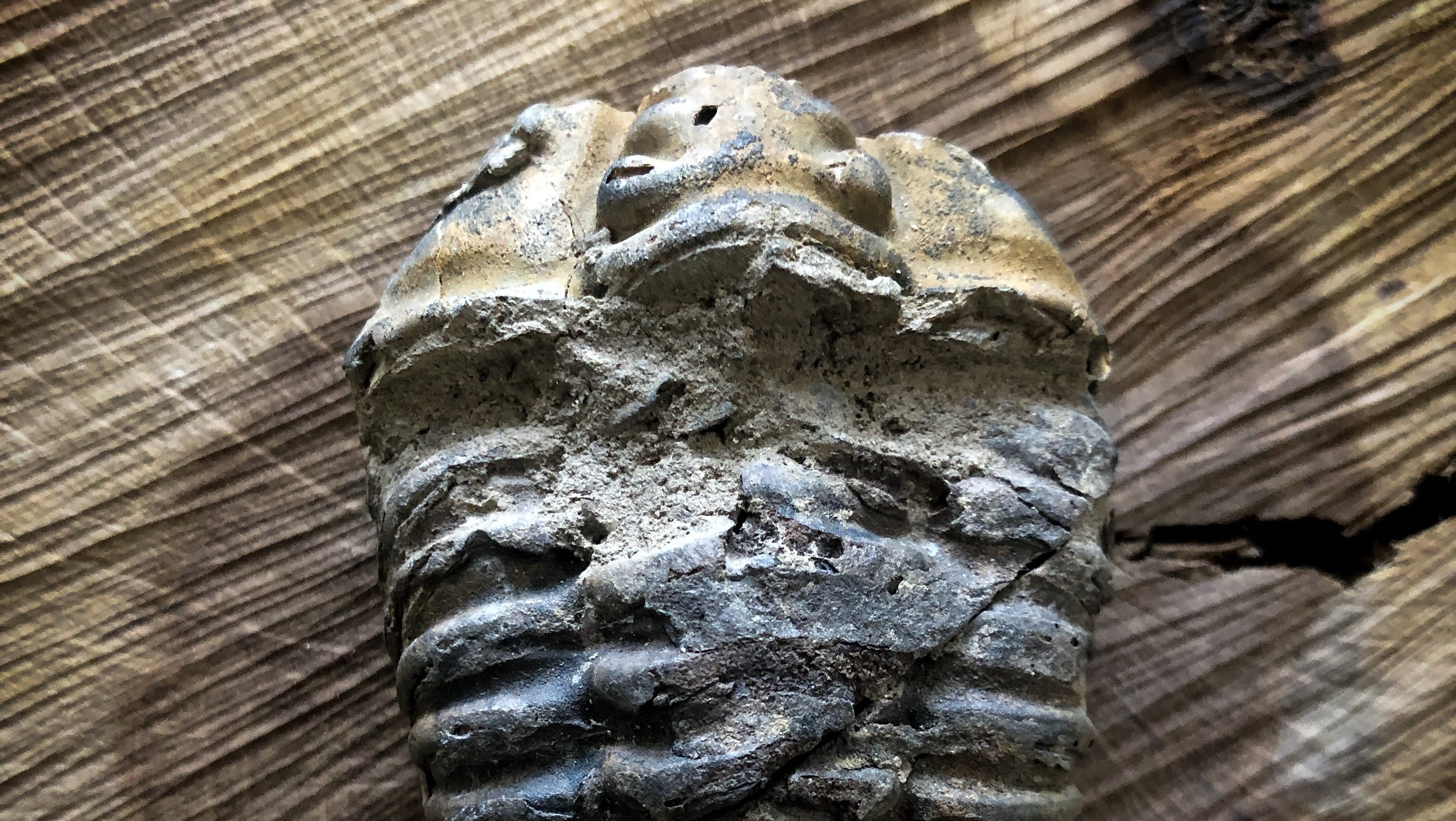 It’s #FossilFriday, and you know what that means—fossils. Big surprise, right?

This week, with an unoriginal but begging to be used titular parody on the classic Star Trek episode ‘The Trouble with Tribbles”—we’re talking trilobites.

Here is my trilobite.  It was a gift from my brother (podcast co-host) he picked up at a rock convention. Yes, that is a thing.

You’ve probably seen one before. In fact, I’d almost guarantee that you have. They’re incredibly common. Like, ‘for sale at the museum gift shop right next to a bunch of ammonites’ common. There’s a reason for that. Despite the fact that the planets hasn’t seen a living trilobite since the End Permian extinction about 250 million years ago (more on that in a moment), these Pokémon-esque creatures were once the most common and diverse animals on the planet—20,000 species and over 60 different families diverse (there’s even one named, no joke, Han solo). Some even had eyestalks!

Despite holding such a coveted spot on the shelves of the “History of Life Hall of Fame”, their success really peaked around the end of the period in which they first arose. Meaning that, despite roaming the ocean floor around the globe for nearly 300 million years, their golden years “only” lasted from roughly 540 mya to 500 mya (myo=million years ago, in case you didn’t catch that).

Their evolutionary arrival on earth came about in a period of time called the Cambrian Explosion when multicellular life diversified rapidly, relatively speaking—or at least an explosion in diversity of hard-bodied animals that fossilized well. It’s hard to say. We weren’t there after all. What lead to such an explosion? A lot of things: richly oxygenated atmosphere, warm temperatures, high sea levels, you name it. Either way you look at it, the fossil record evidence indicates that new creatures branches and speculated at unprecedented rates.

But where did they live? What did they do? And what the fossil are they? The fossil record holds some answers.

Trilobites had a global expanse, and their fossils have been found on every continent. They were arthropods and, like all other arthropods, were spineless critters with an exoskeleton, a segmented body (trilobite means three lobes, after all, except those three refer not to the head, thorax, and tail, but to the three distinct side to side lives running vertically on the body), and paired, jointed appendages. Arthropoda is a Phylum, the classification level just below Kingdom, so it encompasses a ton of life, including arachnids, insects, and crustaceans. They account for nearly 1 million of the estimated 8.7, with over 90% of those being insects. Trilobites were more akin to crustaceans like the Horseshoe Crab. As such, these creatures dotted the ocean floor. Masters of niche-acquisition, different species are different things. Some ate algae; others ate worms. Earlier species fell more into the latter category as predator-scavengers, while later species were more commonly particle-feeders.

Most trilobites had eyes, though some were blind. Many had complex compound eyes with a wide range of vision. Not always well preserved, trilobites also has a variety of spines, and other surface structures to aid in underwater sensory. They had many little legs under their armor plated bodies, and even had complex digestive systems.

Like modern crustaceans, trilobites molted as their body outgrew their exoskeleton. In fact, a likely majority of their fossils are actually just empty casings left behind. The largest fossil ever found was nearly 28 inches long and belonged to the species Isotelus rex, but they range in between all the way down to just a few millimeters. Tracks of their movement have even been fossilized, some lending evidence to their diet composition as they converge on and stop at worm hidey-holes. Imagine being a worm and peeking out of your front door to see a scuttling mass of trilobites inching toward you. Yikes.

If ever the tables turned (which, side note: everytime I hear or write this phrase, I immediately think of Michael Scott’s “My, how the turntables” moment on the office and nearly cry-laugh), because they did (the Permian is when earth really first saw the rise of predation as a thing), trilobites, some at least, could roll themselves up like a rolly-poley (pill big, potato bug, whatever). We know this because, you guessed it, fossils! Some have even been found crushed or with bite marks from the jawed fish who were coming into the seen. In fact, in the Devonian fossil record is when we begin to see more drastically spiky trilobites—surely adaptations to protect them from this new threat from above and make them more difficult to swallow.
However, no amount or armadillo-ing could protect them from the Great Dying—a mass extinction 250 million years ago that wiped out over 70% of land species, 95% of those on the ocean, and all trilobites. Most haven’t even heard of that extinction event. Everyone’s favorite (which we will be covering in a two parter season 2 finale of the podcast), that of the dinosaurs, gets all of the attention. According to a 2018 study, this extinction occurred in a geological instant with organism dying en-masse.

What exactly caused it? There are a lot of theories. The leading hypothesis is that a massive series of volcanic eruptions covered  part of what is now Siberia with over 4 million cubic kilometers of lava. This released huge amounts of sulfur dioxide and carbon dioxide into the air, and apparently burned immense amounts of coal, heating the atmosphere and acidifying the oceans. Other theories relate to an impact or death by change in climate due to microbial life.

This was hardly the first of mother nature’s first attempt at assassinating these little creatures. For example, in the Ordovician period, their was a drastic cooling of the earth which diminished algae and other food sources, followed by glaciation and a drop in sea levels. This was another major extinction event for the planet long before the Great Dying known as the Ordovician-Silurian extinction. It say the elimination of roughly a 1/4 of life and about 1/2 of trilobite families.

Again, in the late Devonian, massive carboniferous sediments covered the ocean floor and the oxygen levels began to drop significantly. This had a massive cascading effect on ecosystems around the globe and nearly wiped out the trilobites. Only 4 trilobite families survived.

Despite their eventual demise, the story of trilobites is a story of survival and perseverance—much of which can be read like ancient hieroglyphs from the very earth they once ruled.